Formation of our Solar System

Exoplanets can help us understand our own solar system, how it formed, how it evolved and how it came to look the way it does today. Continue reading for a description of how our Solar System came to be.

The basic layout of our solar system has been known for centuries. We have the Sun in the center, surrounded by four rocky planets, two gas giants, and two ice giants. The planets can be seen even with small telescopes, and it was noted early in the history of astronomy that they move in orderly orbits, in near perfect circles, at a fixed distance from the Sun. Based on this observation, it is no surprise that the assumption of fixed orbits has been the bedrock of the study of the solar system since the beginning.

Over the years, this simple tale of the evolution of the solar system has progressed into a story of chaotic migration of the planets, bombardments of asteroids and comets, and potentially the exclusion of a ninth planet. Following the turn of the century, astronomers realized that their model of the formation of the solar system, which assumed that the planets formed exactly where they are now, doesn’t fully agree with what we see. Furthermore, observations of planetary systems around other stars (exoplanets) made us question the formation of our own.

Our Solar System (from https://en.wikipedia.org/wiki/Solar_System#/media/File:Planets2013.svg)

A Star is Born

The story of the solar system starts 4.6 billion years ago with the collapse of a gigantic cloud of gas and dust, known as a giant molecular cloud. The majority of the collapsed cloud collected in the center to form the Sun, and the remaining material flattened out into a rotating disk around the star.  It is out of this disk, that the planets, moons, asteroids and comets formed.

There are two main categories of planets in our solar system: the rocky terrestrial planets in the inner solar system (Mercury, Venus, Earth, and Mars) and the giant gassy and icy planets in the outer reaches (Jupiter Saturn, Uranus, and Neptune). Even though these two ‘types’ of planets appear so different, their formation followed the same initial recipe. 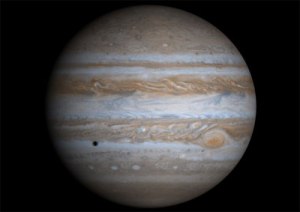 Like for any recipe, you need ingredients. The main ingredient to build planets is dust that clumps together to build larger rocks. This clumping happens as the gas and dust in the disk orbit around the Sun in swirling and random motions, resulting in many collisions between the individual particles. As the particles collide, they stick together, and eventually, given enough time, form large bodies. Similar to the rolling of a snowball across a field of snow, the larger the ball, the more efficiently it picks up more material and therefore the faster it grows.

A second ingredient is ice. Due to the heat from the Sun, ice grains can only reside beyond a certain point in the solar system, known as the ‘ice line’. As the ice helps the dust grains to stick together, planets can grow more rapidly where this ingredient is available. This is how the gas and ice giants managed to become so large. Jupiter, for example, formed just beyond the ice line. It sucked up over half the material in the disk, and quickly outgrew the other planets, making it the dominant figure in the solar system.

The third main ingredient that went into making Jupiter was gas, which formed a blanket around the planet’s core. The new-born Sun would have heated up the inner solar system and over time blast away the gas in the disk. This means that in order for Jupiter to collect the amount of gas that it did, it must have formed before the gas was ejected by the Sun, in the astronomical blink of an eye of only five million years.

Saturn was also in a favourable position to become large, and grew into a gas giant similar to Jupiter. Further out, Neptune and Uranus, grew to smaller sized and are primarily made out of ice, making them the ice giants.

Unlike the gas and ice giants, the inner-most planets had no gas to claim as their own, and are therefore made out of dust. The so called terrestrial planets, formed through the slow process of colliding particles, becoming larger with every collision until all the material was assembled into four rocky bodies. The accompanying figure shows the relative sizes of the planets.

This model of the formation of our planets can’t explain all the properties that we observe. Why is Mars so small? Why are Uranus and Neptune so far away from the Sun? Where did the craters on the moon come from? Further questions arose following the discovery of planets around other stars, known as exoplanets, which lead us to question some of our most fundamental assumptions of the solar system.

The first exoplanet was discovered in 1995, and since then we have been pointing our telescope at distant stars in order to study their solar systems. To everyone’s surprise, these other planetary systems looked nothing like our own, and we saw planets in places where they can’t have possibly formed. This was the first hint to suggest that planets are not fixed in their orbits, but take wild journeys around their stars.  It was this observation that made us question the fixed nature of our own planets, and astronomers went back to the drawing board to come up with new chaotic models of the evolution of our solar system (see the image below for our theory of the evolution of the Solar System).

Evolution of the Solar System by Nora Eisner

A new model was proposed, which suggests that Jupiter started to migrate towards the Sun as soon as it formed, during a time when the terrestrial planets were still in their infancy. Saturn followed Jupiter’s inwards path, resulting in the two planets getting closer and closer until Jupiter was completing exactly three orbits for every two of Saturn’s. This alignment halted the inward motion of the giants and forced them back into larger orbits. This is known as the Grand Tack model.

On this adventure, Jupiter travelled inwards to approximately the current orbit of Mars and back out to where we see it now. This movement caused large scale disruption in the solar system. First, by entering the orbit of Mars, Jupiter stole material that would have otherwise contributed to building the small red planet. This explains Mars’s smaller than expected size. Second, it is thought that Jupiter could have halted the formation of an entire other planet by scattering rocks that would have otherwise grown into a full sized planet. Instead of clumping together, a band of rocks remained to orbit the Sun, known as the Asteroid Belt. Finally, as Jupiter migrated into the inner solar system, it snowploughed gas and ice rich bodies across the ice line. These bodies would have been scattered in all directions, bombarding the young terrestrial planets and seeding them with water and other gases. Without this water brought to Earth by Jupiter, we would likely not be here.

Bombardment of the Planets

Once Jupiter and Saturn were back in larger orbits, the inner planets were able to fully grow by accumulating all the matter in their local area of the disk. Uranus and Neptune also grew to their full size, at a distance from the Sun significantly closer than where we see them now. Furthermore, contrary to where they are today, Neptune was in a smaller orbit than Uranus. Beyond the orbit of all the outermost planet resided a thick belt of icy bodies.

These icy bodies tugged at the large planets, one by one over hundreds of millions of years, once again making the orbits of the giants more and more unstable. A point came where the orbits of Jupiter and Saturn were so disrupted that they no longer remained in their stable orbits. Jupiter moved slightly inwards, pushing the other giants outwards in a violent motion that could have propelled one or even two unknown planets out of the solar system entirely. This is known as the Nice model. Neptune was thrown beyond the orbit of Uranus through the belt of ice and rocks, scattering material across the solar system. This attack, called the late heavy bombardment, left scars on the surface the planets and moons.  Our Moon is no exception to this, with many of the craters that we see on it today still remaining from this violent era 4.1 to 3.8 billion years ago.

Following the late heavy bombardment, the planets settled into stable orbits around the Sun where they have remained ever since. Over the course of 20 years, our view of the formation of the solar system changed drastically. As we continue to explore solar systems around distant stars, we will learn more about our own, and continue to solve the mystery of how we got here.

One response to “Formation of our Solar System”