Today we have a guest post by Jules, fellow Planet Hunter and zooite who attended the ZooCon1. Jules is a lead moderator and blogger for the Solar Stormwatch and Moon Zoo forums as well as a volunteer on the Zooniverse Advisory Board.

Just back from the very first #zoocon1 in Chicago. I attended as a volunteer on the Zooniverse Advisory Board. As Meg said it was a chance for the science teams from new projects to meet with and learn from representatives of current projects and for everybody to meet up with Zooniverse techies and developers. It made sense then for some of the “old hands” to present an overview of their own projects. Meg’s Planet Hunters talk was particularly interesting as it highlighted the value of Talk and the great collaborative work being done there by volunteers.

A brief foray into data reduction showed the kind of work necessary to make the clicks usable. For example, there are 5,508 stars with possible transits. Removing all pulsating stars, which can be mistaken for transits, reduced the number of candidates to 3,404. Further examination of these transits reduced the pool further to 77 transit candidates – a much more manageable number. 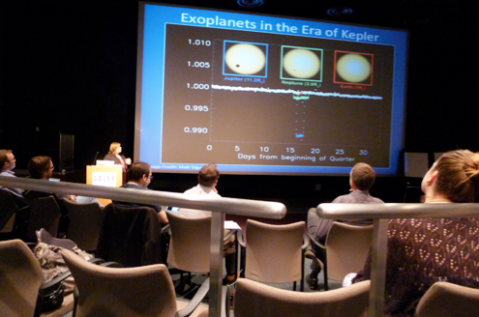 The discoveries Meg highlighted included a slide showing 4 planet candidates missed by Kepler one of which is being re-investigated because of the work done by Planet Hunters. Kepler 16, the circumbinary system, also got a mention as did the impressive volunteer-led analysis on cataclysmic variables and heartbeat stars.

Old Weather, Mergers and the Milky Way Project were also put in the spotlight. Afterwards someone from one of the new projects told me how amazed they were that volunteers would want to do more than just click and another told me that they found the Planet Hunters story particularly inspiring and wanted to know how Planet Hunters had attracted these “awesome people.”

Well that’s Citizen Science for you. Volunteers come with a great mix of interests, skills and the knack of finding treasure!