Today we have a guest post from Stefano Meschiari. Stefano is a postdoctoral researcher at the University of Texas at Austin. He works on planet formation in binary environments and planet detection through radial velocities and transits. He developed the Systemic software as a tool for scientists and citizens to analyze radial velocity data, and he is also the creator of Super Planet Crash. His hobbies include cooking, clumsy puppeteering and all things pop culture. You can read more about his research here. Today he’s going to tell us a bit more about Super Planet Crash. 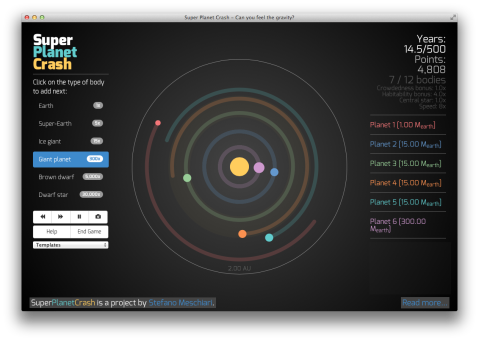 Since Newton’s law became the accepted model for gravitation, physicists, mathematicians and astronomers have been preoccupied with a simple question: is the Solar System stable? Planets weakly perturb each other through gravity, and over time, these perturbation can add up in an unpredictable (chaotic) way. This can even result in planets colliding or being expelled from the system. For exoplanetary systems, a common criterion to validate a set of orbital parameters is to check that the system is stable on scales of billions of years — if the system is unstable, we would not be observing it today!

Super Planet Crash is a simple online game that lets you design exoplanetary systems and drive them to instability. It is a digital orrery that evolves a planetary system according to Newton’s law of gravity in your browser. You can add up to 12 bodies of preset mass in initially circular orbits. Your score is calculated based on how close your system is to instability — more massive planets will yield more points, but your system may go unstable more quickly! It’s a delicate balancing act.

Design your exoplanetary system and watch it go BOOM at http://www.stefanom.org/spc.