Today we have a guest post from Nate Kaib. Nate is a postdoctoral researcher at Northwestern University.  In terms of research, his main interests lie in using computers to model the orbital dynamics of exoplanets as well as the small bodies of the solar system. He’s written numerous papers on the evolution of comet orbits within our own solar system and how they can be used as a tool to constrain the solar system’s history.  More recently Nate has  gotten interested in the evolution of planetary systems residing in binary star systems.

In a select number of exoplanet systems, astronomers have successfully measured the inclinations between the stellar equators of parent stars and the orbital planes of the planets found around these stars. This is done by measuring something called the Rossiter-McLaughlin effect, which is a subtle change in the Doppler shift of a star’s light that occurs during a planetary transit (see wikipedia for a brief overview). Based on models of star and planetary system formation we would expect all of these inclinations to be near zero since the star and planetary system form out of the same spinning, collapsing gas cloud. Indeed, our Sun is only inclined about 7 degrees with respect to the Earth’s orbit.

Surprisingly, however, groups led by Amaury Triaud and Josh Winn have found that many planet orbits are highly inclined to the equators of their host stars. In fact, some are even retrograde, meaning the planet orbits the star in the opposite direction that the star spins. Explaining these results has presented a major problem for theorists, but several promising mechanisms have been proposed. Most of them assume that all planetary systems initially form with the star’s spin and planetary orbits aligned. However, later dynamical processes alter the planetary orbits. These include planets scattering off one another during orbital instabilities as well as Kozai resonances, which is where a distant massive perturber such as a giant planet or binary star excites both the inclination and eccentricity of an inner planet.

These previously proposed mechanisms imply that highly inclined planet have all gone through at least one major disruptive instability. This would then seem to preclude well-ordered multi-planet systems similar to our own solar system from having planetary orbits that are highly inclined with respect to their star’s equator. In a recent paper, however, we showed that an additional mechanism exists to alter planetary orbital inclinations, rigid body precession. Unlike the other mechanisms, this one will only act in well-ordered tightly packed systems of multiple planets (like our own). The other key ingredient is that there must also be a distant binary star in the system. In this configuration, the binary star’s gravity tugs slightly on the planetary system. These perturbations are very weak but add up over time. If only one planet is present in the system, then the Kozai resonance mentioned above will usually be activated. However, if more than one planet is present, then the self-gravity of the planets cause them to evolve in a coherent manner. They remain on nearly circular orbits, and their mutual inclinations all remain low. Instead, the plane of the entire planetary system begins to tip over relative to the star. (How far it tips over depends on the exact orbit of the binary star.)

As a proof-of-concept, we demonstrated in a recent paper that such rigid body precession is likely ongoing in one very well-known planetary system, 55 Cancri. This system consists of 5 planets on roughly circular orbits. In addition, there is a small star orbiting the entire system at 1000 AU. Because this star takes at least 10000 years to make one orbit, we do not know its true orbit. To characterize its potential effect, we therefore ran hundreds of computer simulations modelling its effects on the planets for many different plausible binary orbits. The final results indicate that the star causes this rigid body precession most of the time, and we found that the most likely angle between the planet orbits now and their original plane is a little over 60 degrees. Thus, in addition to flipping over planetary orbits by more violent processes, it may be possible to do it gently and wind up with planetary systems like our own that are highly inclined to their host star.

To better understand rigid body precession, below is a movie  (click on the image to view the movie) made from one of our simulations. In this movie, the white orbits are the two outermost planets of 55 Cancri. (The binary star is not shown since it is 200 times further away.) The green arrow marks the initial orientation of the planetary orbits, while the red arrows marks the instantaneous orientation. This evolution shown in this particular movie takes place over 50 million years, but other simulations require billions of years for similar types of evolution to occur (depending on the exact binary orbit). 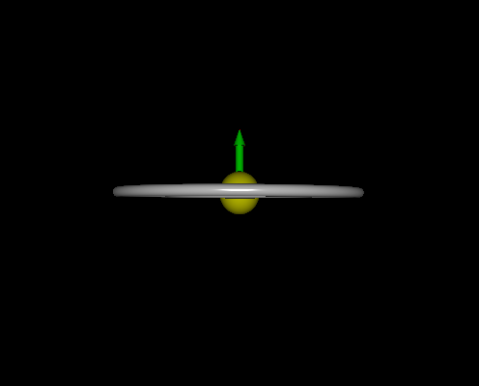 Click on image to view a movie of the orbits precessing