There was a  great question about transits in response to my post about “What Factors Impact Transit Shape” so I thought I’d answer in a blog post.

Question: In the image of Venus transiting the Sun, there are sunspots. How common are sunspots on the Sun-like stars in the Kepler field? How do sunspots change the transit light curve? How are sunspots modeled?

Starspots are  dark blotches on the surface of the star and are regions of intense magnetic activity. Their temperature are lower than the rest of the photosphere which gives them their dark appearance. These blemishes are transitory and last anywhere from hours to months. They are an indication of the magnetic activity of the star, and the Sun goes through an 11-year cycle where the number of starspots (or sunspots as we call them on the Sun) changes. The more active the Sun, the more sunspots visible on its surface.

If you viewed the transit of Venus last July, there were several sunspots on the surface of the Sun which you can see in the image below.

Transit of Venus – Image credit- Wikipedia – http://en.wikipedia.org/wiki/File:2012_Transit_of_Venus_from_SF.jpg – Venus is at the top right of the Sun’s disk. Other dark blotches are sunspots.

On the Sun we can actually spatially resolve the sunspots, but on other stars we can’t. So for Kepler that is monitoring stars thousands of light years away, we detect starspots through the light curve. As the star rotates, starspots will come in and out view causing changes in the star’s brightness. The pattern in the star’s light curve will repeat once per rotation period of the star. At the equator, the Sun rotates every 24.47 days much longer than the short few-tens of hours that a planet transit lasts. 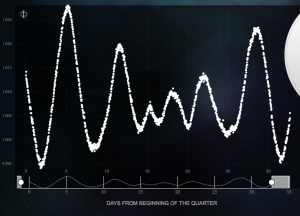 If the transiting planet doesn’t cross over a starspot we get a fairly rounded U-shaped symmetric bottom to the transit as you can see below for a set of simulated planet transits.

Simulated planet transits including limb darkening of the star. For the plot I assume the star 0.8 times the radius of the Sun and the planets cross the center of the star

Because planet transits last a few to tens of hours and stars rotate over a period of days, you can think of the starspot as effectively stationary with the planet moving across it during the transit. The starspot is not as bright as the surrounding areas of the photosphere, so when the planet transits across that starspot the lightcurve gets a bit brighter than average and you don’t see a symmetric bottom to your transit. So you see a small positive bump in the transit lightcurve.  In the observed transit shown below, the planet crosses a starspot during the second half of the transit.

Planets transiting starspots can be extremely useful. Those transits have been recently used to measure the alignment of the planet’s orbit to the rotation axis of the star. In our Solar System, the planets are about 8 degrees off from being aligned with the Sun’s rotation axis, but other planetary systems are severely misaligned.

If the planetary system is aligned with the star’s rotation axis, then the planet transit path is a chord that always crosses over the starspot when it is in view, so you will see many of the planet transits having the signature of a starspot crossing. Because the star is also rotating between transits, the starspot will be likely be in a different place on the star’s disk the next time the planet comes around so you will see the timing of the bump change from transit to transit. If the orbit is misaligned, then only when the starspot is in a position crossing the planet’s transit chord across the star’s surface will there be a positive bump in the transit lightcurve. So the next several transits the planet has extremely low chances of being timed such that the starspot is in the same position on the star’s disk for the event to repeat.  So you should see no starspot signal in subsequent transits. You can see this effect below in the figure from Sanchis-Ojeda et al 2012.

3 responses to “Starspots and Transits”