The Hill of the Telescopes

An Observer’s start to the Day

Panoramic shot showing the two MAGIC telescopes (left and centre) and CTA (right); the William Herschel Telescope laser; the NGT in the distance (middle); and the GTC (middle right). All photos by Oscar Barragán.

Our ‘day’ here in La Palma starts around 4 pm. After a quick breakfast and a much needed coffee we head up to the mountain to the telescope where the telescope operator has already started setting up the equipment for the night. The Sun is still high in the sky so the telescope dome stays closed while we carry out the calibrations of the instrument that we plan to user throughout the night.

Once all the calibrations are done we have to wait for the sunset, giving us time to have dinner, visit other telescopes, or have a quick snooze in preparation for the long night ahead. The telescopes around here are incredible, and we have bee lucky enough to get a tour of three of the most impressive ones.

Sunrise reflected in the mirrors of the CTA.

MAGIC (Major Atmospheric Gamma Imaging Cherenkov Telescopes) and CTA (Cherenkov Telescope Array) are the first telescopes that you see when you drive up the mountain from sea-level and their impressive mirrored structures make you feel like you have entered into another world. MAGIC is a system of two Cherenkov telescoped which detect particle showers in the atmosphere released by gamma rays. The twin-telescopes each consist of a 17-m diameter dish that is covered with smaller mirrors that reflect the light into a highly sensitive camera.  Next to MAGIC lies the newly built CTA which has a similar design and beautifully reflects the stars at night the sunrise at the start of the day. All three of these telescopes are sensitive to galactic and extragalactic gamma-rays, allowing us to study high energy events in the Universe such as active galactic nuclei, gamma-ray bursts, pulsars and supernova remnants. Without any domes, these telescopes proudly dominate the hillside, making the scenery look slightly surreal (or MAGICal).

Inside the dome of the INT.

The next telescope that we visited was the 2.54-m optical Isaac Newton Telescope (INT). It was initially built in 1967 at Herstmonceux Castle in Sussex, England (the initial site of the Royal Greenwhich Observatory) but was moved to La Palma in 1984, due to light pollution and the less-than-ideal British weather. The INT is the oldest telescope on the mountain, and walking into the impressive building gave me the slight feeling of going back in time. The control room is filled with computers from the 70s with a control deck that exhibits analog dials and manual knobs that control various aspects of the telescope.

The telescope is located on the third floor and sits on a warm wooden floor along with tanks of liquid nitrogen that are used to manually cool the electronics. But it’s not just the telescope that’s impressive at this observatory. Leaving the dome of the telescope we set off on a tour to explore the rest of the building, which felt like a beautiful combination of a museum and a 70s royal bunker. It is fully equipped with office spaces, sleeping rooms, rooms and cupboards filled with various electrical equipment and spare telescope parts, and an incredible library that hosts books and journals that date back to the eighteen hundreds.

We also headed to the roof of the INT, which presented us with a good view of the 4.2-m William Herschel Telescope (WHT) that is currently shining an extremely powerful orange laser into the atmosphere (see top image). Simultaneous observations of this laser and the targets throughout the night allows us to correct for the effects of turbulence in the atmosphere, transforming fuzzy observations into sharp images.

Our final telescope tour was of the Gran Telescopio Canaria (GTC), the largest optical and infrared telescope in the world. As we walked into the silver dome we were overarched by the huge structure of the telescope – with a height of over 25 m from top to bottom it truly is gigantic! The primary mirror is made up 36 individual hexagonal segments that perfectly piece together to act as a single 10.4 m mirror. The segments, which are made of a ceramic material similar to that used for modern kitchen hobs, are polished to perfection, conforming to a 15 nanometer (millionths of a millimetre) margin of error. But not only does each mirror have to be perfectly uniform, the individual segments must also fit together smoothly with no more than 90 nanometers difference between each. To put this into perspective, if the primary mirror were scaled up to the size of Texas, the ‘unevenness’ would have to be kept to less one millimetre. Automatic sensors are used in order to ensure this degree of accuracy throughout the observations. 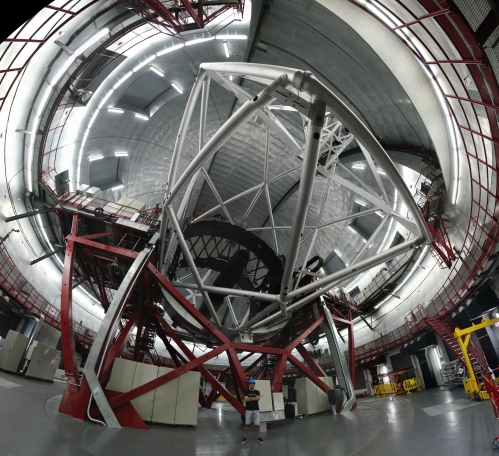 The gigantic structure of the GTC with Oscar for scale.

Its immense scale combined with the perfect location makes the GTC the ideal telescope to study the nature of black holes, the formation and evolution of stars and galaxies in the early universe, the nature of exoplanets and the mysteries of dark matter and dark energy that fills our Universe. The 400 tonne instrument was truly amazing to see.

Back to our own Telescope

Getting ready for a fun night of observing with a sunset-espresso.

At sunset we drive back up to our own telescope, slightly overwhelmed by the beauty of the sunset that is reflected off the sea of clouds that lies beneath us. So far we have been lucky and have always remained above the clouds, leaving us with beautifully clear skies that allow us to obtain spectra of Kepler and K2 targets. But what are Spectra and what can they tell us? Stay tuned for the types of observations that we are obtaining during our time here.

One response to “The Hill of the Telescopes”