Light curve(s) of the week: asteroid 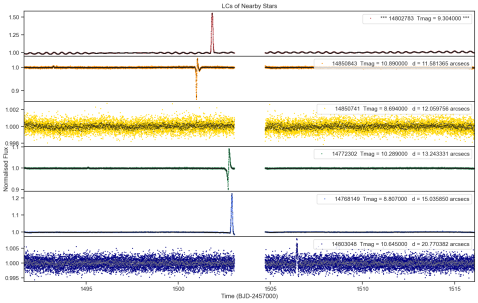 Asteroids are small rocky bodies that are left over from the time of the formation of the Solar System. They range in sizes from small rocks that you could see on the side of a lake to hundreds of kilometers across. There are as many as hundreds of millions of these within our own Solar System, so it comes as no surprise that we often see them in the TESS light curves, manifesting themselves as spikes or dips or anything in between.

The above figure shows the light curves of six bright stars observed by TESS, sorted by their distance with reference to the top object (the red light curve). As you can see, almost all of them show a ‘strange’ signal, which is very likely caused by an object such as an asteroid passing through the field of view. 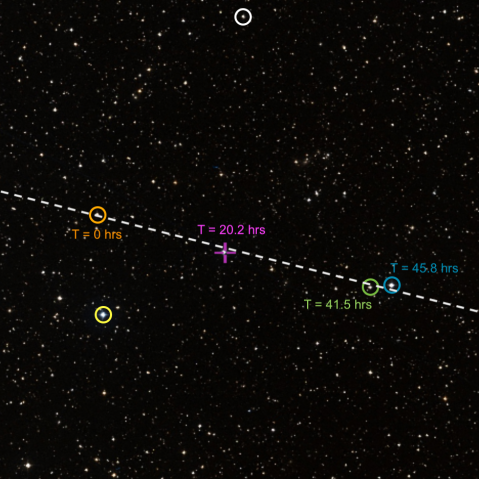 This next figure shows an approximation of a possible path of the asteroid, which was determined by matching the times of the events with the locations of the target stars. The target stars are highlighted with circles of the same colours as the light curves in the first image, and the times are the times in hours since the first event (in the orange light curve). Based on a very simple estimations of the times and projected distances, we can approximate the projected speed of the asteroid to be around 0.6 arcseconds per hour.

Asteroids are fascinating objects that allow us to probe the conditions of the Solar System during the time of its formation (4.5 billion years ago!). If you’re interested in making your own light curves, such as those in the top figure, you can download a program called LATTE to have a go.