Greetings from the Big Island of Hawaii. I’m here for my observing night on Keck II, part of the pair of 10-m telescopes on the summit of Mauna Kea. I applied months ago through the Yale Time Allocation (TAC) for a night to use NIRC2 with Natural Guide Star Adaptive Optics to zoom in around potentital Planet Hunters planet candidates and other Kepler planet candidates to see if there are any lurking stars (like in the case of PH1 b) that may be contaminating the Kepler light curve and diluting the transit depth that we measure (and the size of the planet that we measure). These observations can also be used to help rule out potential false positive scenarios for these candidates as well.

So after flying in from NYC late last night, and making the drive from the Kona airport to Waimea, I’m finally at Keck VSQ (Visting Scientist Quarters) on the Big Island of Hawaii. You might ask why I’m not remote observing from Yale as other members of the science team has done on many other ocassions. This is my first time on NIRC2 and Keck II, and since it’s all new, it’s best to come out and sit next to the support scientists and helpful people at Keck HQ to show me the ropes.

Keck Observers don’t go up to the ~14,000 feet summit. We stay at sea level in Waimea and remote observe with the summit operator. My night is on Friday and my first night ever observing with NIRC2 or Keck II, so today is prepping target lists, reading instrument manuals, making my own observing notes, and generally prepping for tomorrow night. Later tonight, I’ll be sitting in the remote room behind tonight’s observers who are doing similar things with NIRC2 and graciously allowing me to hang out and watch. I’ll be looking over their shoulder and try to learn and get familiar with the instrument and control guis. Then tomorrow afternoon, once the instrument is released from the day crew (who prep the instrument and take care of general maitenance on the instrument and the telescope), I’ll meet with the support astronomer who will help me setup the instrument and answer any questions that I have.

I’m soloing, so I’ll be pretty busy during the observing run and the next few days, but I’ll try and blog in between updating you on what’s going on here in Hawaii.

To give you a taste of what it’s like to be here. I’ve taken lots of photos: 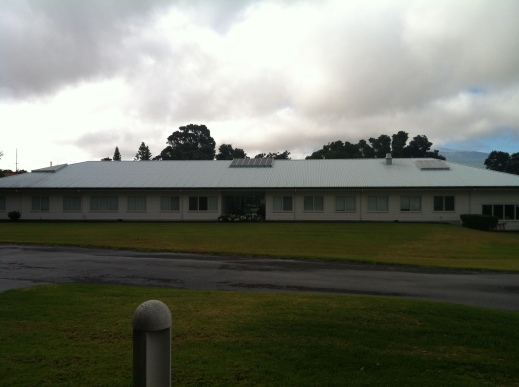 Main Keck building. Keck HQ. Located in here are the remote observing rooms for Keck I and II

Dorms for the observers.

Inside my dorm room. Awesome thing about the Keck observing quarters is the thick wooden panel shutters for the window to block all the light so you can get some sleep post sunrise.

There’s even a beach towel waiting for you

View of a cloudy Mauna Kea

I don’t think I’ve been on an observing run on the Big Island without stopping at the KTA for food and supplies. Made my stop there this morning.

6 responses to “Tales from Waimea Part 1”