A mysterious object no more

This post is by Tabby Boyajian, one of the Planet Hunters science team at Yale

As you all know, planethunter volunteers use archive data taken with the Kepler space telescope to classify lightcurves and identify transiting planets. Since the launch of the Planethunters citizen science program, we have contributed five scientific publications reporting on the discovery of dozens of candidate and confirmed exoplanetary systems – otherwise undiscovered by the Kepler team.

The design of the project is expanding with the opportunity for Planethunter volunteers to support astronomers interested in using Kepler data for scientific research unrelated to the main exoplanet goals of the Kepler mission. We have dubbed this as our own ‘Guest Scientist’ program. The idea is that guest scientists participate in Planethunters Talk forum and make requests for the public to collect particular light curves, such as signatures of moons or rings, pulsators, variable stars, flare stars, cataclysmic variables, or microlensing events. 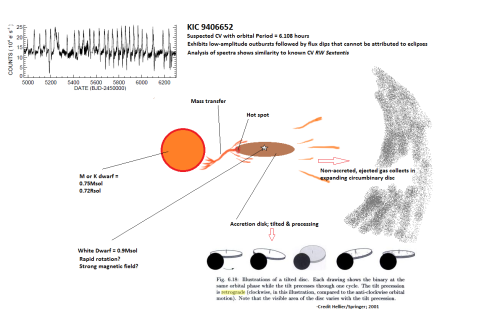 This schematic, by Planet Hunter Daryll LaCourse, shows off our new discovery. (Click to make larger)

We are delighted to announce that the first paper presenting results associated with the Planethunters Guest Scientist program has been accepted for publication in the Astrophysical Journal! In this paper, the lead scientists Doug Gies and Zhao Guo from Georgia State University and Steve Howell and Martin Still from NASA AMES follow up on a mysterious object in the Kepler field identified by Planethunters, later confirming it to be an unusual type of cataclysmic variable. They perform an in-depth analysis on the Kepler lightcurve as well as observations made at the Kitt Peak National Observatory 4-m Mayall telescope and RC spectrograph. The result is a newly published paper, so take a momtent to read ‘KIC 9406652: An Unusual Cataclysmic Variable in the Kepler Field of View’ or to check out the planethunters talk thread where the object was first discovered and discussed:

Thanks you all for your enthusiasm and contributions to the scientific community. We have several other projects underway so keep an eye out for updates in the future!

4 responses to “A mysterious object no more”