Planet Hunters have just made another important contribution to our understanding of planets beyond the solar system! The paper entitled “PLANET HUNTERS. VIII. CHARACTERIZATION OF 41 LONG-PERIOD EXOPLANET CANDIDATES FROM KEPLER ARCHIVAL DATA” has been accepted for publication by the Astrophysical Journal. A preview paper can be found at the astro-ph archive: http://arxiv.org/abs/1512.02559. This work is made possible by many diligent and creative citizen scientists who are acknowledged on http://www.planethunters.org/#/acknowledgements.

The census of exoplanets is incomplete for orbital distances larger than 1 AU. In this new work, we present 41 long-period planet candidates in 38 systems identified by Planet Hunters based on Kepler archival data (Q0-Q17). Among them, 17 exhibit only one transit, 14 have two visible transits and 10 have more than three visible transits. The majority of the planet candidates in this work (75%) have orbital periods that correspond to distances of 1-3 AU from their host stars. In comparison, Earth and Mars are located at 1 and 1.5 AU, respectively. With the help of hundreds of thousands of eyes of planet hunters, we are starting to probe exoplanets at Mars distance and beyond.

The majority of these new planet candidates have 1-2 visible transits during Kepler’s 4.5 years’ life time and were therefore not prioritized by the automatic Kepler planet search pipeline, which requires at least 3 visible transits. These discoveries from the Planet Hunters project are complementary to the discoveries by the Kepler mission that focuses on planets located in and interior to the habitable zones of stars. The following figure best illustrates this point. The yellow points are previous PH detections and the red points are discoveries from the latest paper. We are pushing the limit for long-period planets that can be detected by the transit method! 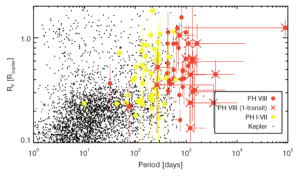 We conducted follow-up imaging and spectroscopic observations to validate and characterize planet host stars. These observations took place at some of the world’s biggest optical telescopes, including the two Keck 10-m telescopes on the summit of Mauna Kea in Hawaii, the 200-inch Hale telescope at the Palomar observatory, and a fully-robotic adaptive optics instrument, Robo-AO. In total, we obtained adaptive optics images for 33 stars to search for possible blending sources. We obtain high-resolution spectra for 6 stars to determine their physical properties. Thanks to these follow-up observations, 7 planet candidates have been validated including 3 planets with just a single transit (KIC-3558849c, KIC-5951458b, and KIC-8540376d), 3 planets with two transits (KIC-8540376c, KIC-9663113c, and KIC- 10525077b), and 1 planet with 4 transits (KIC-5437945c).

This work provides new information about the existence of additional planets at even wider separations. More than half of the long-period planets with at least three transits in this paper exhibit transit timing variations up to 41 hours, which suggest additional components that dynamically interact with the transiting planet candidates The long transiting timing variation, surpassing those of any previously known systems, elevates some discoveries in this work as truly exceptional. This was highlighted in the following quote from the paper: “Four systems have synodic transiting timing variation larger than 20 hours, making them the “queens” of transit variations as opposed to the 12-hr “king” system KOI-142.”

We now have more than 260,000 users and have analyzed more than 20,000,000 30-day light curves. The focus of the Planet Hunters now includes the K2 mission, and we expect that citizen scientists will find many more exciting and unexpected discoveries with the K2 data.